Word of the Day: Asian Ponytail

For the longest time I though that this type of hairstyle was specifically for babies so that adults could ooo and ahh over how cute the baby's hair was, I was wrong. As I have watched more and more Korean dramas and music videos, I have noticed that guys seem to be rocking this look too.

At first I thought that it was the weirdest thing because, why would they do that? They are grown men wearing a child's hairstyle. As I saw it more and more though, I have come to decide that it is simply a fan service thing. Why else would their stylist do that? 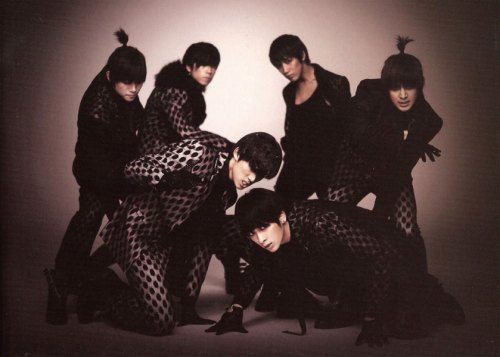 As beastly idols, aren't they suppose to be setting themselves apart from groups like Super Junior who constantly seem to have this style? (More on that in a second). They just have this very cool and tough look in the picture, but the two members on the side are like "Surprise! We're adorable!" I don't know how I'm suppose to feel!

Back to Super Junior, how many members have had this style?

I guess Hangeng, Kangin, Zhou Mi, and Henry are just too cool to do this kind of thing.

I am sure that there are many more groups that have done this, but that would make this post really long and it has already become long picture wise because of Super Junior.

Who are some other guys that rock this adorable, yet pointless, look?