Something magical happened during this song. Normally VIXX is pretty good about part distribution except when it comes to Hyuk. Not that he doesn't get parts, but they're normally small and he isn't really featured when he sings. The sun has shined upon Hyuk though and he got parts and he was front and center during them too. He also has a similar sounding voice to Onew which is okay by me because I like voices that had that type of sound. 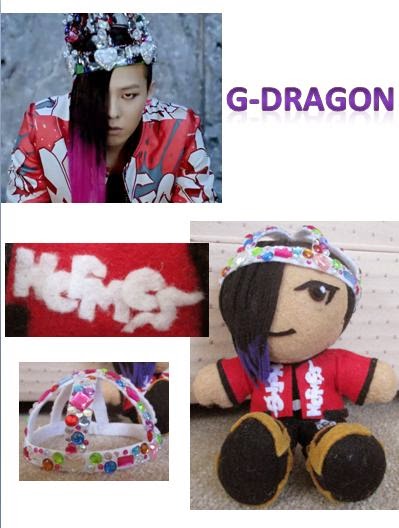 And here we have the last installment of dolls that would have gone on an Etsy account had I not got a job in Korea.

GD in the leader of the the boy group BIGBANG and "Fantastic Baby" might be one of the best song ever. Ever. He was also really fun to make and a little stressful because there was quite a lot to do on him.

Starting from the top and going down, there is the crown. I first only decorated the base and was then slightly hesitant to glue jems to the head parts because I thought it would collapse, but luckily the glue stiffened it so that didn't happen. It is still a little delicate though.

Then there is the jacket. In the video, there is a lot more detail, but I just left it at the "Hermes" on the front of the jacket. I had never made letters before and they were also really small AND I had to make an identical set. Wow. They turned out well though.

Last, there are his shoes. I made them in a similar manner to the Minho Etude House doll and then I painted them with some gold glittery paint for an extra bit of pizzazz. Something I forgot, I also made those white and black leg things he has with white felt and fabric paint. Yep, this guy was not easy, but it was fun! A good thing is that he didn't have a lot of hair to do on top of all these other things. Hair normally starts out fun, but the closer I get to the end the more tedious and boring it becomes. 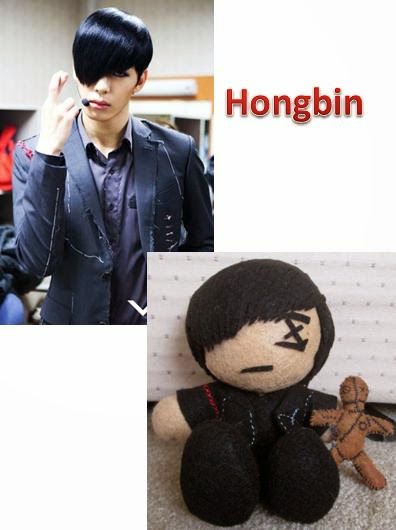 Hongbin is the visual, or "artwork", of the boy band VIXX and I thought that it would be appropriate to post this since they are going to have a comeback on Tuesday! Yay!

I made this Hongbin doll as I was pumping dolls out when I was considering making an Etsy account. I knew that I wanted to make a VooDoo era doll because I thought that the clothes were really cool with all the exposed stitching; and as we know, if there is one thing that I like, it detailing that will make me blind.

Unfortunately, you can't see all of it in the picture, but trust me, it's cool looking. Something cool that you can see though is the little voodoo doll that I made for Hongbin. I tried to copy it as much as possible from all the promotional pictures and I think that I did pretty well. He has a little heart and the word VIXX on his arm and everything. I'm pretty proud of it.

K-pop Blondies, the Good and the Bad

Blonde hair, it can either be the most amazing thing that can happen to an idol's head or it could make you want to throw liberal amounts of hair dye at them in the hopes that they will use it to change their hair back to an acceptable color.

Not too long ago on Allkpop there was an article about a writer's favorite blonde haired idols which got me thinking, who are my favorite blonde idols? And then, more importantly, who are the people who should never, ever, be blonde again (and if it does happen, their stylist should be shot)?

Gongchan isn't my favorite member of B1A4, that goes to CNU, but I still really like him. He has grown into his face recently and he has a really versatile look. One minute he can be the cutest thing ever and the next he's got his smolder on and looking all mature and jailbate-y. Is he still jailbate? I don't actually know and I don't care enough to look it up. I don't think he is......... 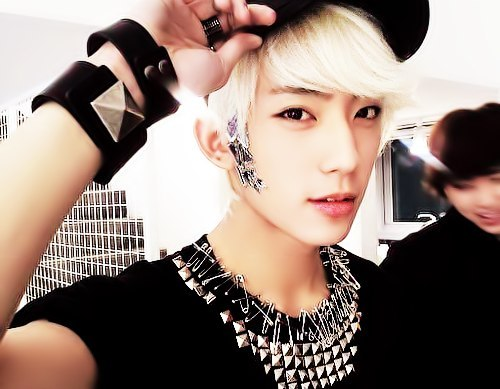 Blonde Hyuk, was the best Hyuk. His blonde was really complimentary to his skin tone so it didn't wash him out like some other people who will be on the bad list. I think that Hyde was also the time that Hyuk started to look more adult like than in previous videos. The baby's growing up and he is doing it well. 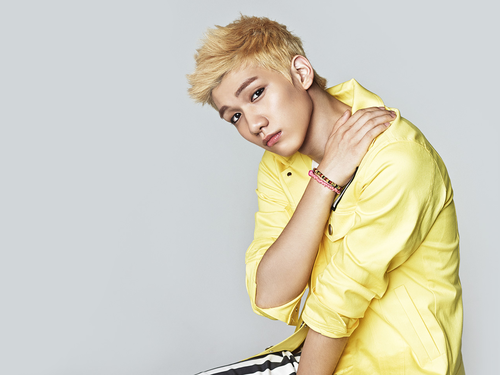 There have been quite a few blondies in Super Junior but my favorite bottle blond in Sungmin. Yes, even with my great love for Heechul and Enhyuk who have also been blonde Sungmin pulls it off the best. I think that it is because Sungmin is already adorable and the blonde adds to that cute innocence that seems to follow him everywhere. 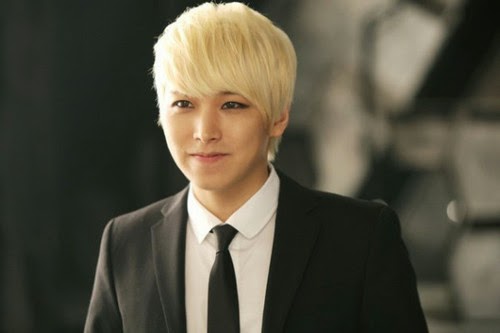 Everyone here knows that Dara is a goddess right? Good. I know that CL is the blonde of the group and she looks mighty fine with her honey hair but Dara looked amazing in this video. Her blonde hair with that white dress and gold jewelry was stunning. She was glowing and I could probably go on but I'll save everyone from that embarrassment and stop here. 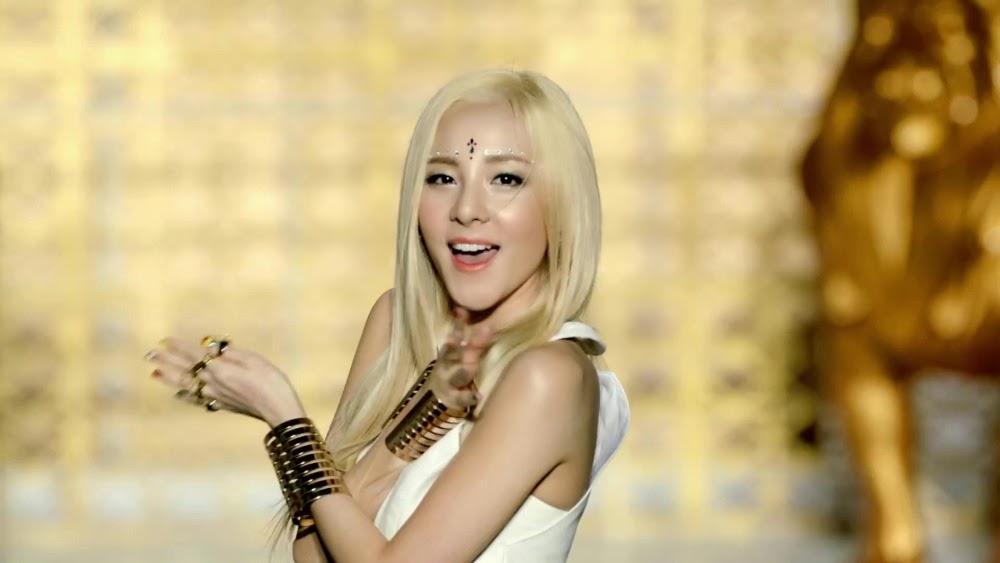 Like Dara, P.O. is not the blonde of the group, that title would normally go to Zico and while I like Zico's blonde hair, I like it better when he has more of a chocolate color like in "Tell Them", post dreads. His hair was so fluffy and beautiful then. I do kind of miss the dreads though, he rocked them. I loved P.O.'s long blonde hair during this era though, even when he had it down, kind of. That middle part was questionable, but then again what middle part isn't questionable? 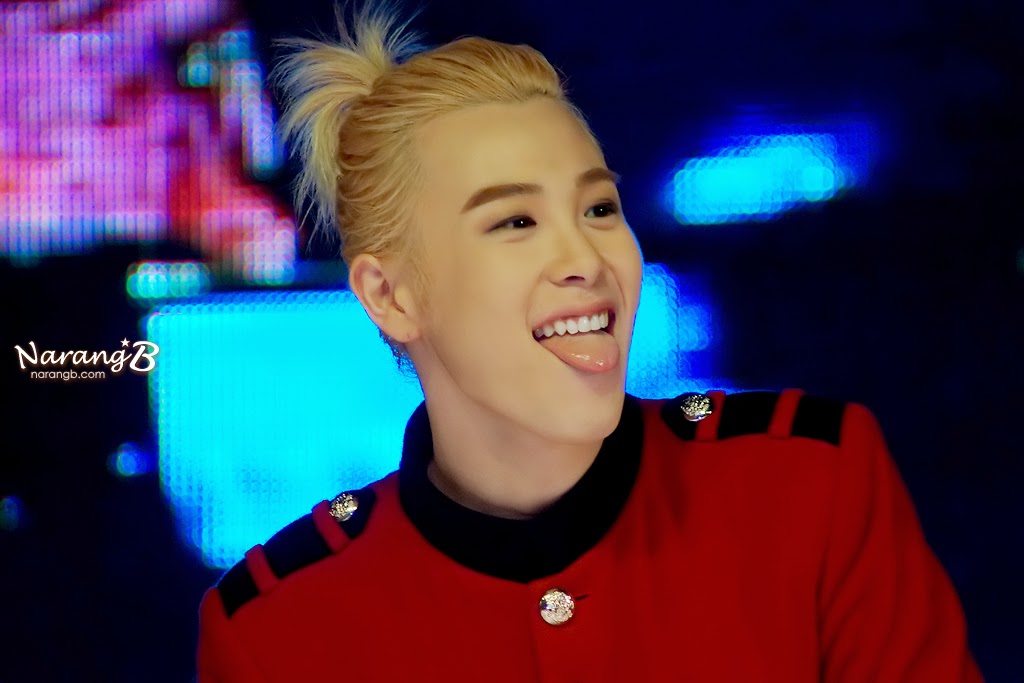 "Don't Don" was a dark time for Kyuhyun. First, he almost dies in that horrible car accident and is unable to promote with the rest of the group and then to add insult to injury SM poured a bottle bleach on his head. This hair is too light for his face and there are artistic dark roots to go along with the song's J-rock concept. I really liked this song, but I do not like what it did to Kyuhyun's hair. 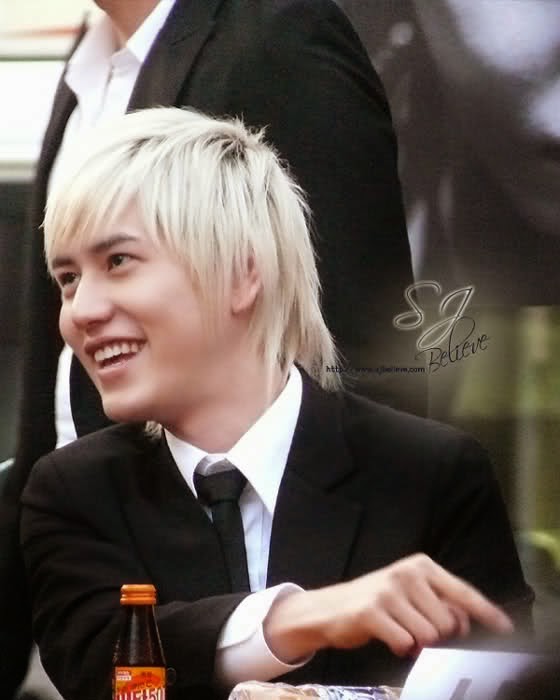 Yes, I am aware that this isn't a flattering picture of Taemin, but I feel that if you need makeup and lighting in order for you hair to work with your face, something is wrong with that. His hair and his face are similar colors and it is making him look sick and gaunt. Taemin can look good with light hair but it needs to be a brown or red blonde. No more single tone light blondes on Taemin's head SM! 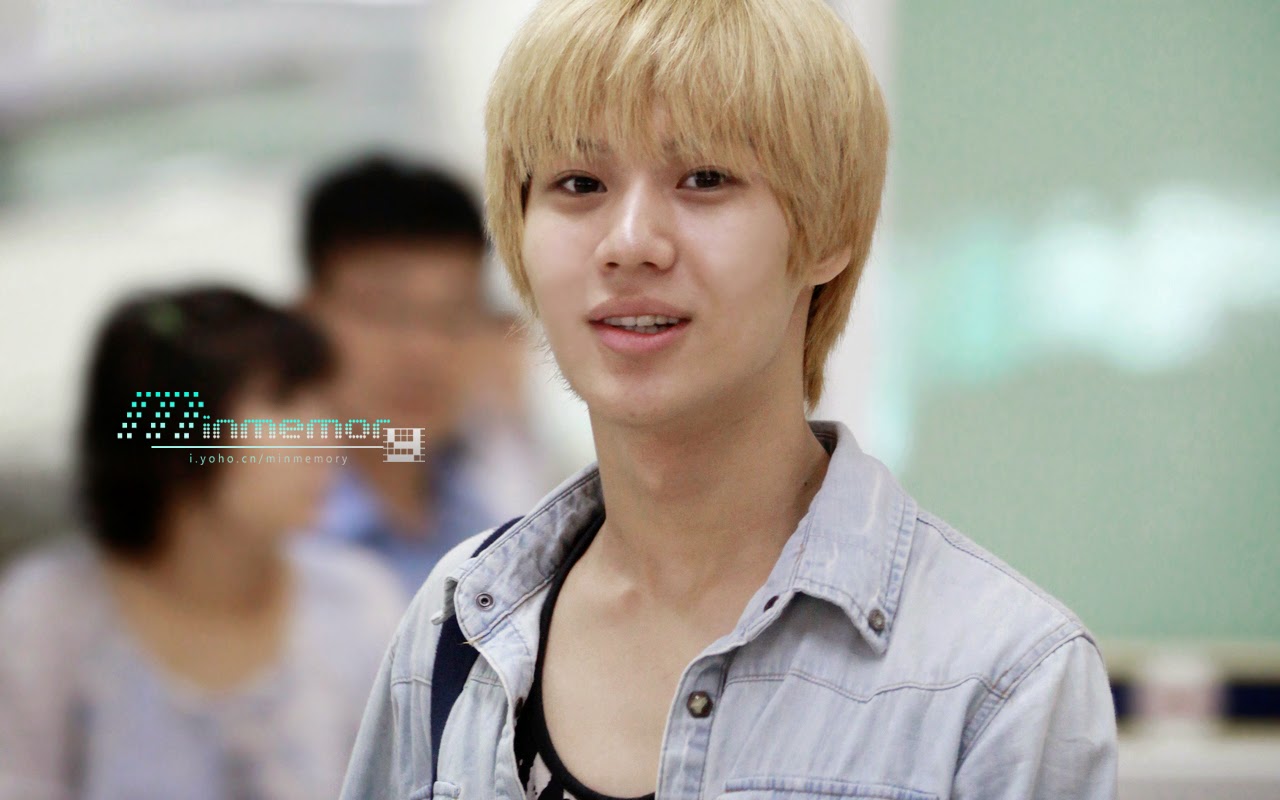 I wouldn't say this was bad in the same sense that Taemin is bad, but Gain definitely doesn't have the same appeal when she is blonde. In "Bloom" she was going for a more innocent look and it matched all the pastels in the video, but for me Gain should always be black. She is this powerful woman that pushes the boundaries that are set around her and I don't feel like she can do that with blonde hair. 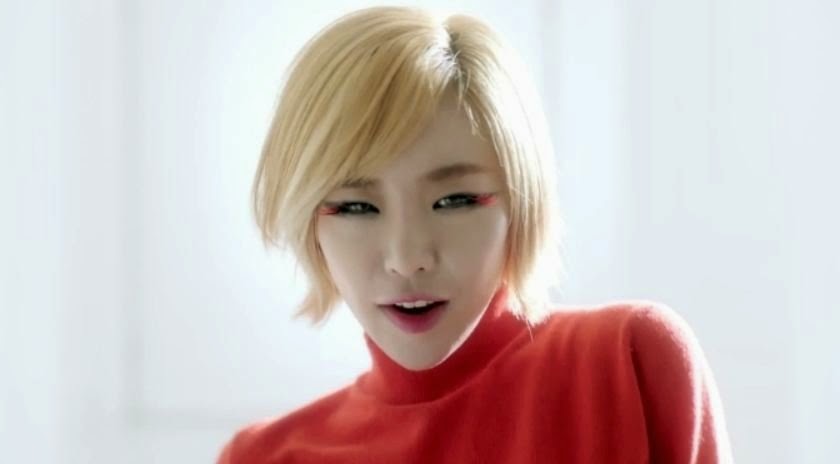 Luckily for the actually video he had silver/grey hair which I did like, but during the "5 Minutes Before Chaos" promotions he had this super weird blonde hair going on. It was also styled quite terriblely in one of the teasers too which made it look even worse. 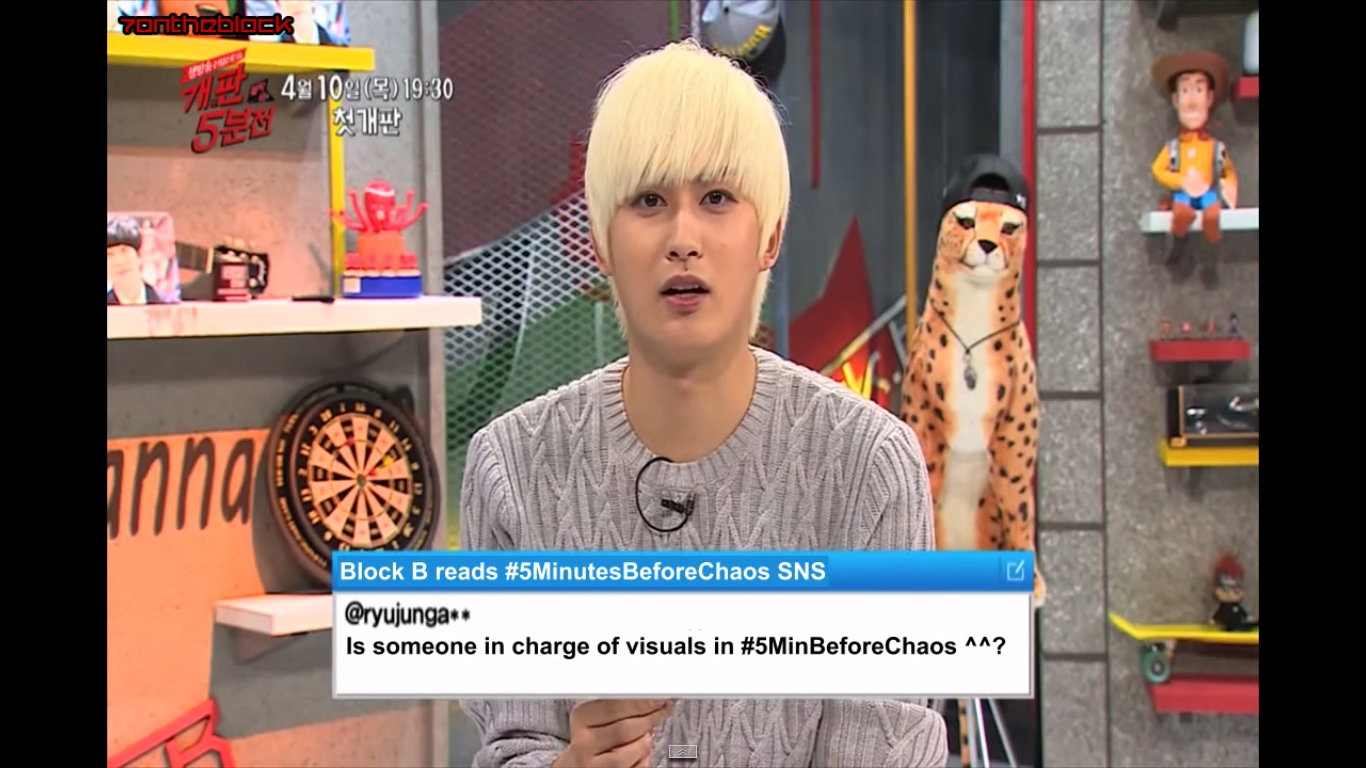 And there you have it people who rock a blonde head and those who do not. I can think of quite a few others who I like blonde or with white hair but not as many who I don't like, what do you think?

I'm not sure if I'm going to post this, it is mainly to get my thoughts together because I have a lot of thoughts. What are these thoughts about? I bet you can guess since this is a K-pop/drama blog and some serious news has been dropped. Kris of EXO has filed a lawsuit Hangeng/TVXQ style against SM and the K-pop side of the internet is losing their minds.

I have been trying to keep up with things because this is very big and also very interesting, especially with all the other lawsuits that SM has had filed against them, and this is where all my thoughts come in.

Bride of the Century 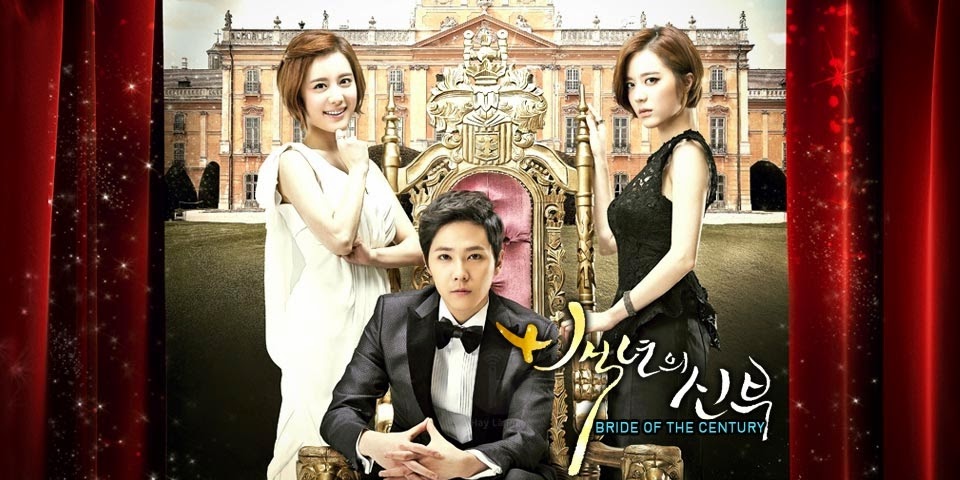 You know what makes typing hard? Having a huge bandage encasing half of a finger. Last Sunday, I stabbed myself while dislodging a piece of frozen fish from another piece of frozen fish which resulted in three stitches. Seriously, if there was a mini Luke Skywalker around, he would have crawled into my finger thinking it was a Taun-taun. It was gross.

And now that you have that image burned into your brain let's talk about this drama!

Email ThisBlogThis!Share to TwitterShare to FacebookShare to Pinterest
Labels: Bride of the Century, Dramas and Movies, F4Plus1, Lee Hongki

Wow! It feels like I haven't done one of these in forever! For good reason though what with the ferry tragedy. It would have been way wrong if people were still out promoting and acting like nothing was happening. This is also going to throw a huge wrench into a lot of companies scheduling too. Companies would want to release songs at a time when there isn't a lot of competition you would think, but now there is going to be a tidal wave of comebacks: 1. because it is summer and that is the time to release things and 2. there have been a lot of groups, both ones we know, and probably ones we don't know, who postponed.

I think that this is our first postponed release though and it's pretty good.