What if You Were a K-pop Stylist?

We asked the members of F4Plus1:

What if you were a stylist and had to dress Korean idols in each of these looks from the 2013 London Men's Fashion Show? 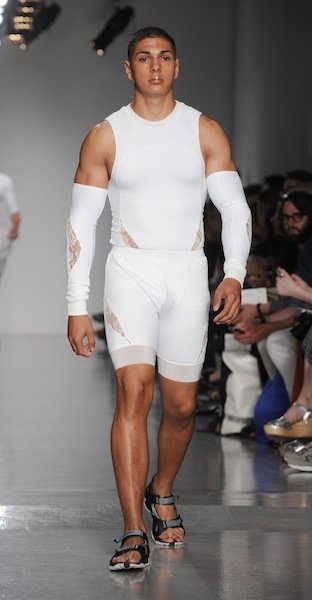 This is Daesung's new workout gear (He's going to the gym to get sexy so why not be sexy in the process?) -Becca

There is no good choice of idol for this outfit, but I can imagine throwing Minho in this for his role in "To the Beautiful You." -Autumn

This is the ugliest thing that I have ever seen, that means that Taemin will probably be wearing it in the next SHINee video. -Alora

JYP (I saw a picture of him in a sleeveless white top and could totally picture the rest!)  -Mindy

What is this?. -Andy 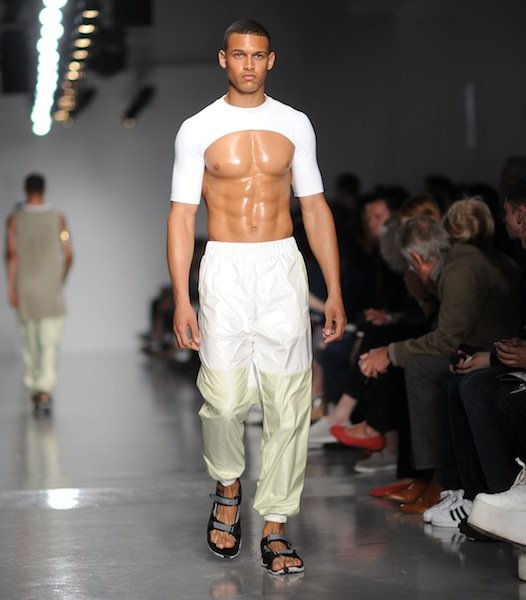 This outfit should be worn by 2PM in their next video. It will save them the trouble of lifting up their shirts to expose their abs. It's functional! -Autumn

Reminds me of Siwon's outfit from Sexy Free & Single, but I think I would give it to TaeYang because he finds fabric around his torso to be too restricting. I think this is his perfect solution. -Becca

Junsu will wear this one in his next super sexy video. -Alora

It should go to Taecyeon- you have to agree with me here! -Mindy 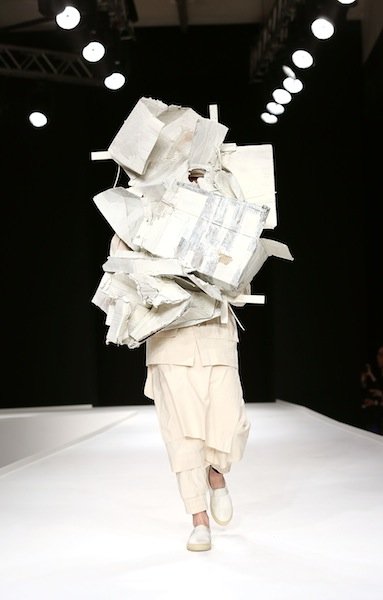 What is this third one supposed to be? Wearing trash paper? -Andy

K.Will announced that he will be starring in his next music video and this is his costume. -Autumn

I think this is a fashion fail for all K-pop idols because we couldn't see their pretty face... that's the whole point... I could however see K.Will's management company saying "The only way you can star in your own music video is if you wear this outfit" To which I say "You're stupid! Merong!" -Becca

I'm going to hop on the bandwagon and say K.Will. Poor K.Will, we think you're cute. -Alora

I disagree, it should be G Dragon- as long as the hole is big enough for his face to peek through during those close up shots. -Mindy 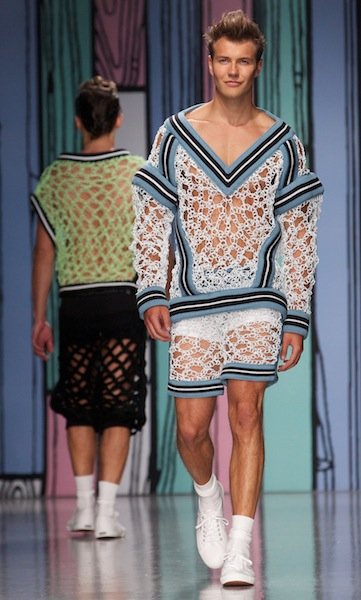 For some reason I keep thinking that only JYJ can pull off this combination of sexy and preppy. -Autumn

I would give to Chansung from 2 PM. I think he has just the right amount of sexy and confidence to pull it off. -Becca

I have been watching "Full House" lately and this loos like something that Rain would have worn in that show. He would be wearing real pants though. -Alora 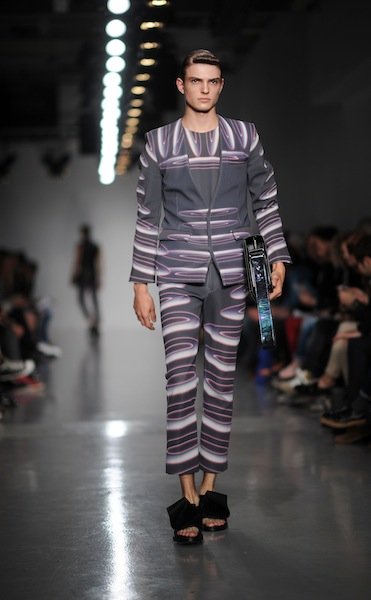 This outfit would be worn by every k-pop idol ever, but I think SHINee would be the first to grab it.  -Autumn

I would love to see Kevin of U-Kiss in this suit. Mostly I just really love Kevin, but I think it would look awesome on him. -Becca

I would give this suit to TVXQ and burn the ones that they wore in the "Keep Your Head Down" video. -Alora 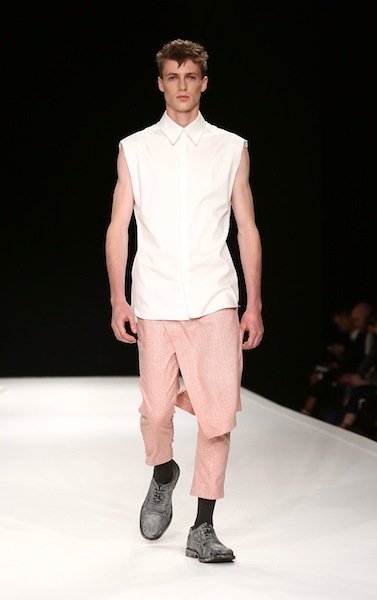 Hongki would rock this outfit so hard. This is definite airport fashion, except he would have better shoes. -Alora

I could imagine Siwon wearing this on a tour though India. -Autumn

As soon as I saw this I thought of Lee Hongki (THE HUNKY ONE!). He would rock this outfit not to mention accessorize the heck out of it. -Becca 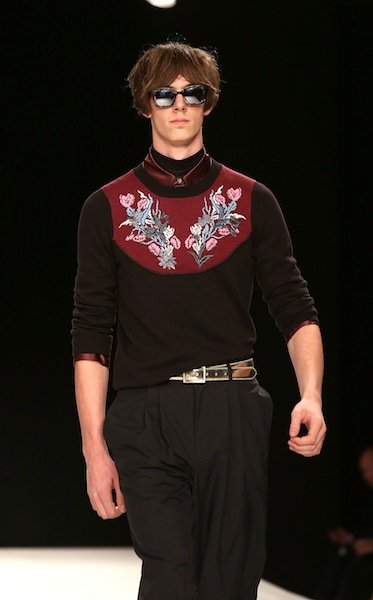 
Yoon Shi Yoon- you know you can see it too. -Mindy

For some reason I think Ryeowook from Super Junior would totally be able to pull this off and make it look super classy. -Becca

This could be everyday wear for TOP. It is a little weird, but totally modest which fits his concept very well.  -Alora

Two words come to mind when I look at this outfit: "crafty" & "Steve Jobs." Hmmm, I guess in that case I would give it to either Psy or JYP. -Autumn

These outfits are all so ugly. -Andy 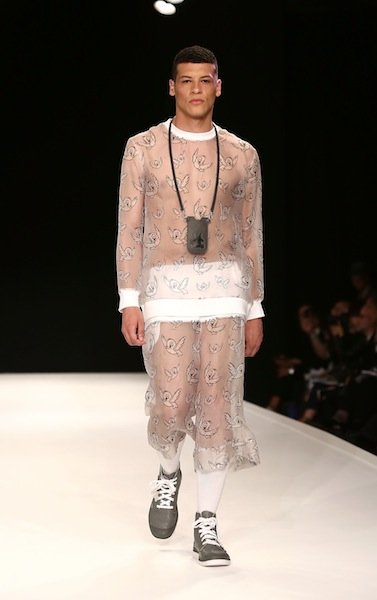 What is going on in these designer's minds!?! -Andy

I think G-Dragon could rock this outfit. He has the swag, that's for sure. -Becca

G-Dragon will be wearing this in his next solo video. -Alora

I'm afraid the only idol willing to wear this kind of outfit would be a nugu group trying to get exposure. Get it? Exposure! Hahaha! -Autumn

What are these designers thinking?? -Andy 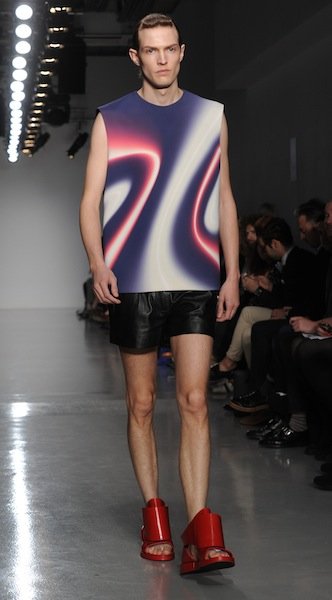 This outfit has no redeeming value and I hate it. So I would give it to Eunhyuk cause I'm still mad at him for what he did on WGM*. Come on Eunhyuk, you know what you did. You deserve it. -Autumn

First of all, I would have to take in the shirt to make it actually fit him, but I think Changmin from TVXQ could pull off those shorts X) -Becca

Amber would look good in this one, it is boyish, but still colorful and weird. The shorts might be too short though. -Alora

* Eunhyuk made a girl cry on a group date during an episode of "We Got Married." It made me cry too. -Autumn 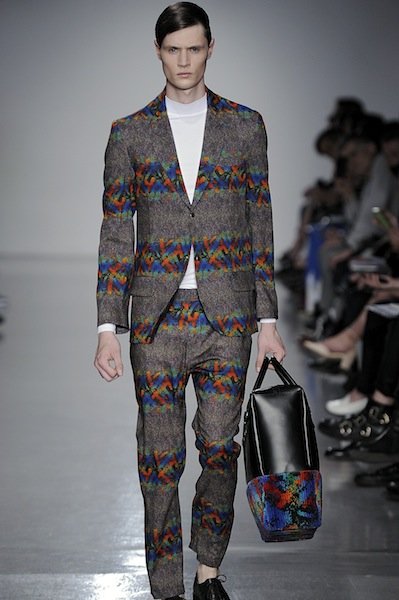 Again, this suit is made for K-pop idols. I'd love to see it on T.O.P., just as an excuse to stare at him. -Autumn

This one is my favorite, so I'd give it to my favorite Idol: Onew! (and have him wear glasses with it.) -Becca

I keep thinking of TVXQ and those awful suits.....they can have this too as long as they never wear those other ones again. -Alora

Email ThisBlogThis!Share to TwitterShare to FacebookShare to Pinterest
Labels: F4Plus1, Games, What If - Then
Newer Posts Older Posts Home
Subscribe to: Posts (Atom)