Words of the Day: Nugu & Concept

Nugu 1. pronoun. Who ex. "Nugu se yo? Who are they?" 2. adjective. A term used in k-pop to say someone is new, unmemorable, or a "nobody". It can be used as a putdown, especially for well established bands. ex. "It's so easy to get tickets for them because they are nugu."

So what do idols record companies do to keep their idols from this dreadful identity? They establish a clear "concept" for their public image.

Concept n. 1. The tool used to invent and/or reinvent individuals, bands, and albums by the music companies that scout, form and promote k-pop groups as a way of catching the public's attention. ex. I really don't like overly sexy concepts for the female groups. They are icky.

The term, "concept," as referenced to k-pop seems pretty straight forward. It is the themes and images used to promote k-pop music in order to keep idols from being considered "nugu". Yes, this is basically a conversation about branding, however, k-pop goes to great lengths to offer a wide variety of "concepts" to catch the publics' attention. What is interesting, is that these concepts are assigned not only to groups, but to individual members, and to different albums. There are also varying degrees of flexibility and variety within these concepts as well. Members can change their concept as they grow and gain more independence and artistic license in their company. But with each new album or mini album, companies feel pressure to have an original concept that will set them apart from the pack, and make sure they are never considered "nugu". Here are a few of the most commonly used concepts in k-pop and the idols who utilize them.


1. Diva / Fashionista - These are the idols with impeccable airport fashion, who grace the pages of major fashion magazines, and who make sure to have things exactly the way they want them.
Examples: Lee Hong Ki, CL, Heechul, G-Dragon & Key


2. Masculine - The "masculine" litmus test for k-pop idols is when you show a picture of them to your parents and they don't respond, "Who is this pretty girl?"
Examples: Teacyeon, Siwon, Rain & Taeyang 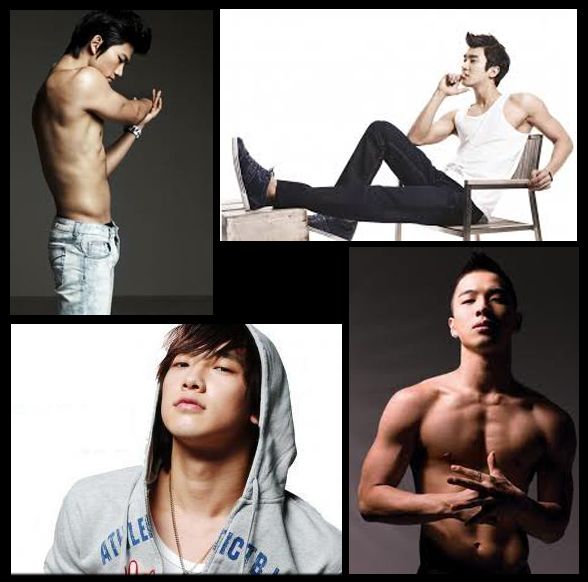 3. Aegyo- This term will be a future word of the day, but for now all you need to know is that it means "cutesy" and "childlike."
Examples: Yoseob, Mir, Nickhun, Sungmin, Teamin, Daesung & A-Prince


4. Funny/Clown- So you want to be a Korean idol, but you aren't the prettiest flower in the garden. What do you do? A.) Get millions of won worth of plastic surgery. B.) Pull a K.Will and never show up in your own music videos. or C.) Embody the concept of the "funny idol."
Examples: Shindong, Psy

5. Outgoing & Talkative- This is not a concept born in the brainstorms of record executives. Instead it organically develops around those few idols who can never really shut up. And we love them for it.
Examples: Kwang Hee & Leeteuk

7. 4th Dimensional- This will be another future post. In a nutshell, Koreans use the term 4th Dimensional to describe people they think might actually be from a different universe.
Examples: TOP, Jaejoong, Dara & Kim Hyun Joong

8. Legs- What!?! How can an entire group's concept be centered not around their voices, nor their sparkling personalities, nor even their faces... but their legs!?! Ya, you must be new to k-pop. Welcome. And yes, in Korea "legs" is a legitimate concept- even for boys.
Examples: Dal Shabat, Brown Eyed Girls, Girls Generation, & Teentop

9. Sexy- While nearly every male idol group has at least one extremely uncomfortable "sexy" album cover *, few groups choose to use this as their primary concept. On the other hand, it's hard finding a good girl group who doesn't outright exploit their sexuality.
*Do a Google image search of SHINee's Sherlock promotional images. They are just too disturbing to post here.
Example: Everyone in #8 plus JYJ

10. Height- Any concept that can make you memorable is a good concept. Even if that means building your group around a certain centimeter. The members of these two groups are on average 153 cm and 172 cm tall ( thats 5' and 5'7" for all you Americans).
Examples: Tiny G & 9 Muses

11. Bands- I often use the term "band," pretty loosely when referencing k-pop, but if you strictly look at the groups that actually play their own instruments, you would realize they are a small minority. For that reason, "bands" inevitably become part of their concept.
Examples: CN Blue, FT Island, LedApple & Eye Candy

IU- "The Nation's Little Sister"
This title was granted after fans voted for her in an online poll and has really become part of her identity... Although, due to some scandals, recent online polls have tried to take this title away. But I say No! It's bigger than you or me. You can't take back her title and try to give it to Moon Geun Young (no offense MGY, I loved you in Mary Stayed out All Night!). It's just not gonna happen.

Jang Geun Suk- "Prince of Asia"
This is the actual photo Jang Geun Suk tweeted to show how he earned this title.


2pm -"Beast Idols"
I'm not sure if they made up the name themselves, or if they were granted this title because of their uber masculine physique, but there is one thing of which I am sure. It must bum out B2ST.


Miss A- "Suzy's Group"
Since "Dream High,"Suzy's popularity has skyrocketed & it has only gotten bigger with her current hit show, "Gu Family Book." But you do have to feel a little bad that her bandmates have been unanimously demoted to the role of, "The Girls Singing and Dancing with Suzy." Hmmm, it would be kinder to not let them find out.

U-Kiss- "Nugu Group"
This is a name that has been haunting U-Kiss ever since their debut in 2008. At that time, they were debuting up against SHINee, 2PM & 2AM, and while they have outlasted nearly every other group that has come from a small music label, it has been a very arduous and uphill battle for them. They have worked so hard, I say it's time for a change to their concept.


What concepts did I miss & what are some of your favorite k-pop concepts? Leave a comment.

Email ThisBlogThis!Share to TwitterShare to FacebookShare to Pinterest
Labels: F4Plus1, Korean Pop-Culture, Word of the Day