Attack on the Pin Up Boys 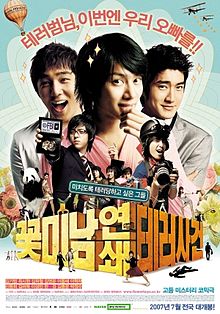 I don't think that anyone can call themselves a true ELF if they haven't seen this movie. It was made during the golden years of thirteen members and all it is is about an hour and a half of fan service. I can't remember how I came upon the movie, but after I watched I gathered the rest of the F4Plus1 and forced them to watch it. I was the biggest K-pop fan at the time so they didn't fully appreciate it like I did, but now that they are more into K-pop, they have re-watched it and love it.

Our story starts out with our two main characters, I guess you could call them, Kibum and Donghae. Kibum has recently quit the student council because Siwon is driving him nuts and Donghae wants to enter a b-boy contest to help him get into college. The best part about this is that Heechul is the leader of this dance group. 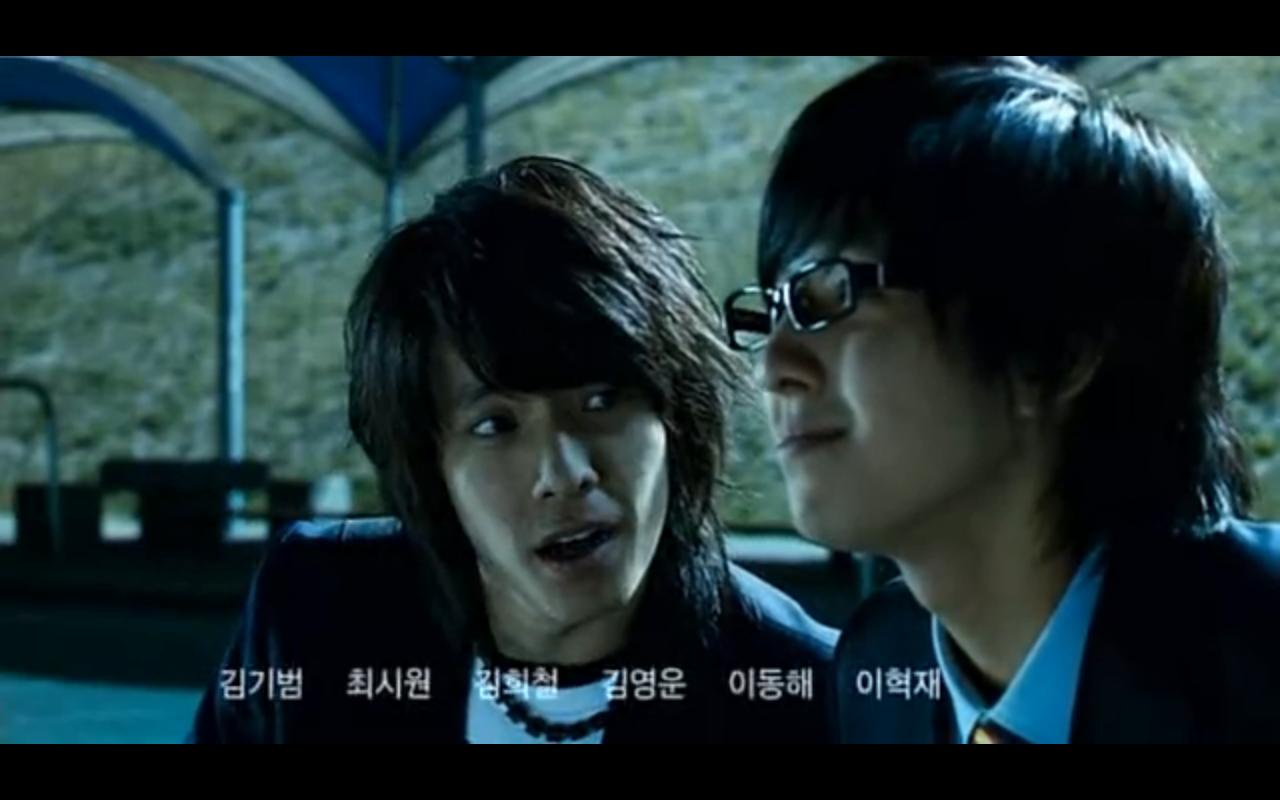 As they talk, Donghae tells Kibum that the lead singer of a band has been attacked. Kibum then begins to think about the other attacks that have been going around. The first victim was flower boy Sungmin.

Sungmin is the pretty boy at his high school who always get love confessions and when he opens his locker (which has stickers that say SM Ent on it), it spits mountains of candy at him. As he is walking home with all of the gifts that he was given that day, he hears something. When he turns around to see who it is he is hit with a bag of poo. 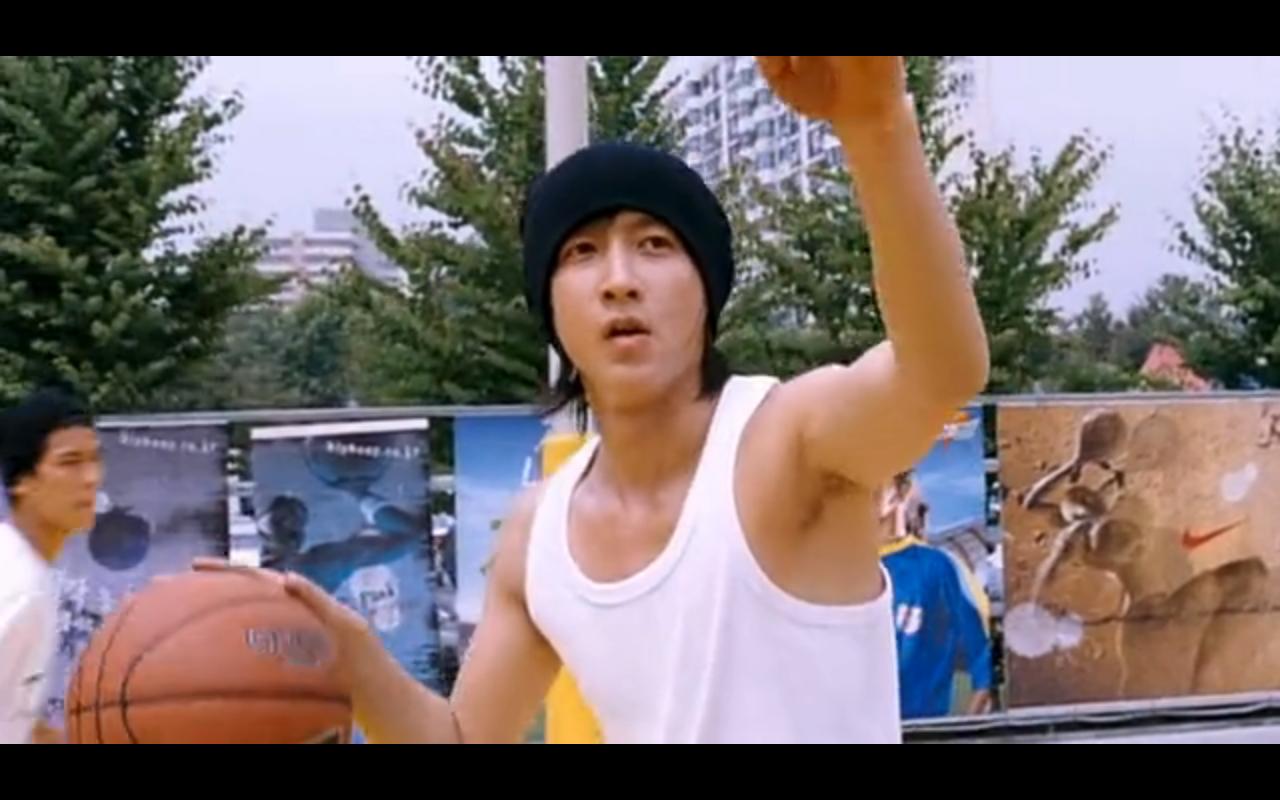 He is also attacked after school when he is walking home.

Our last victim if rocker flower boy Yesung, he is the person that Donghae mentioned in the beginning and the most recent person attacked.

As the movie continues, no one, of course wants to get hit by a bag of poo, except for maybe Heechul. Kangin thinks that he is an idiot for promoting himself on his blog, but Eunhyuk says that he is the smart one, not Kangin. Whoever gets hit by poo is the one that the attacker thinks is the coolest person in the school. Therefore, poo = coolness. That makes total sense right?

Kangin decides to take his own pictures and it is not cute, even if he tries really hard to look that way. 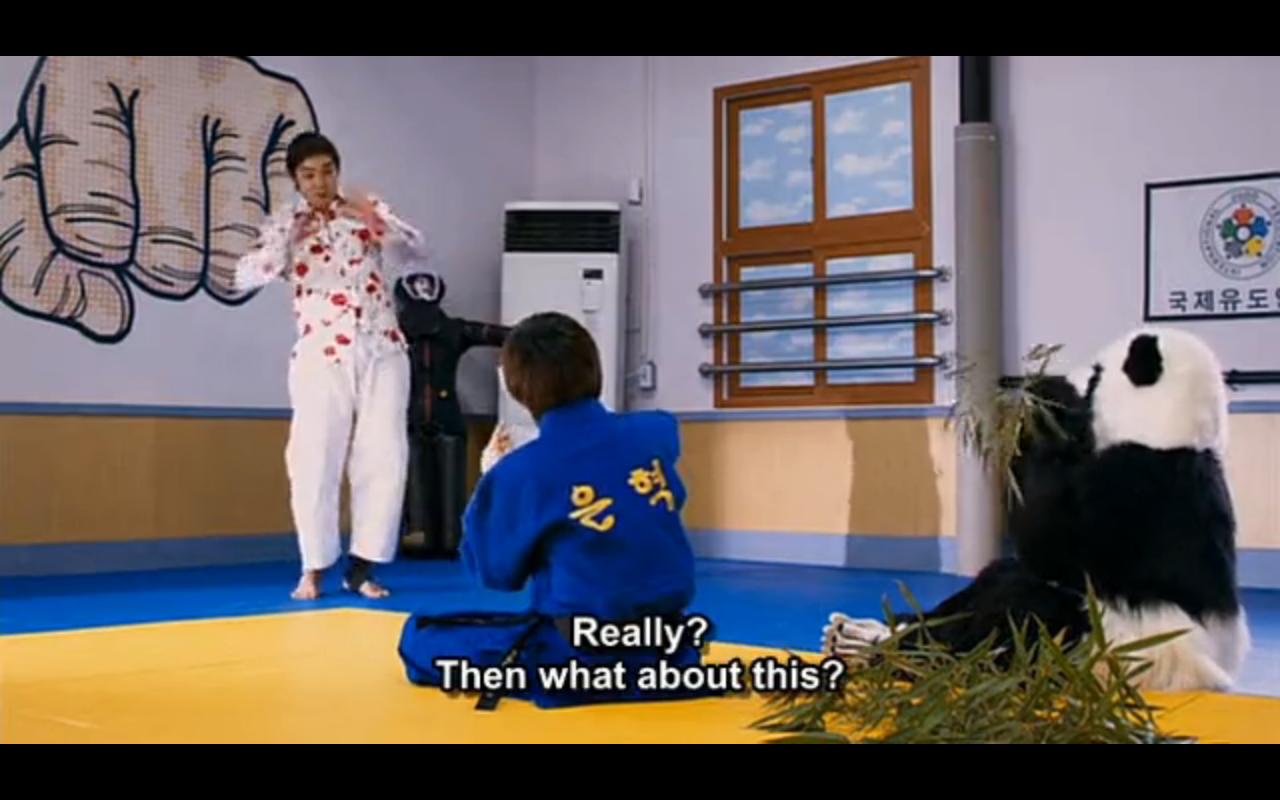 Heechul, trying to get another step ahead of Kangin, decides that the world needs to see his body. His plan is to take his pants off and have Shindong take a picture. Donghae is totally against this idea which starts a very awkward, yet very funny, wrestling match between 'pants down' Heechul and 'pants up' Donghae. 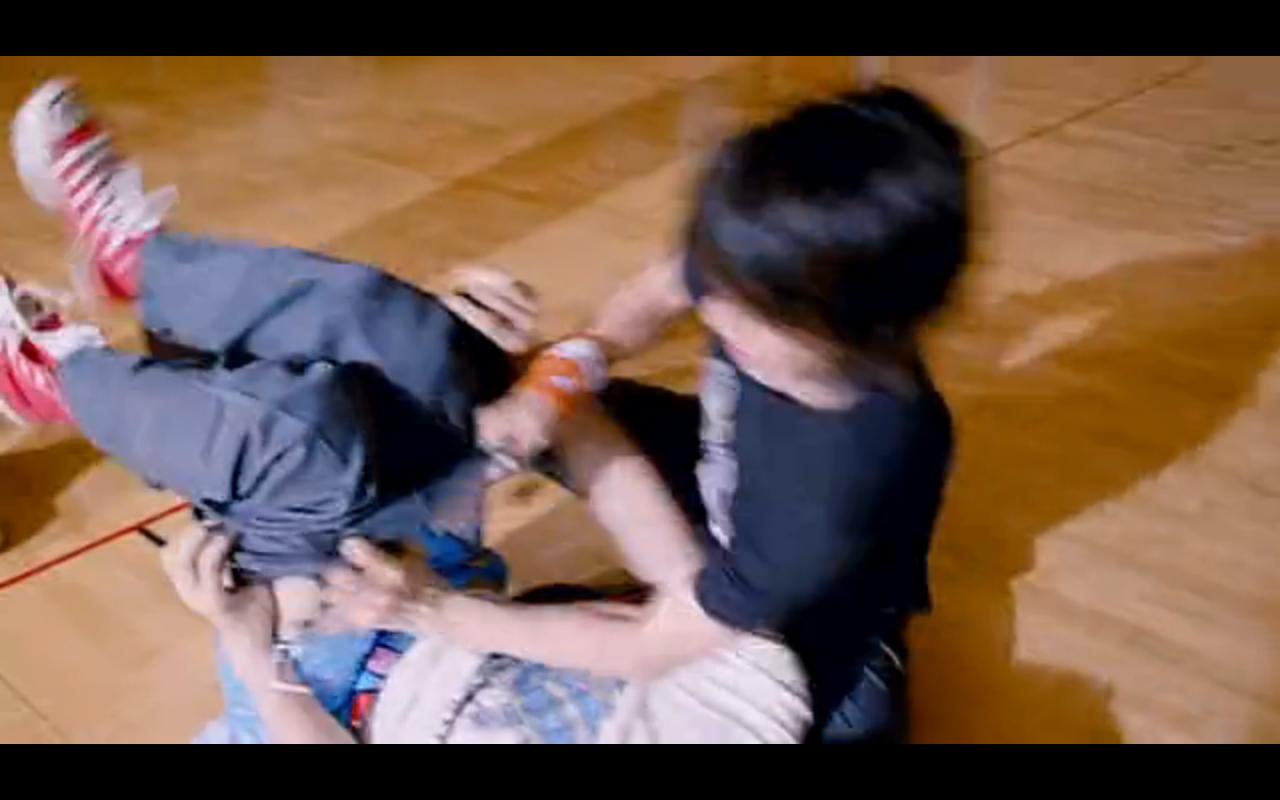 I hate writing about endings in movie reviews. When you know how something ends, it takes away the fun of getting there for there for the person who hasn't seen it. That being said, I think that I'll end right there plot wise.

Something that I really like about this movie is that all the members' characters are kind of like hyperbolized versions of themselves. Siwon is the strong and silent one, Heechul is crazy and narcissistic, Shindong is the fat, funny buffoon, Sungmin is sparkly and full of aegyo, and Kangin is the strong brash one just to name a handful.

There are three scenes in this drama that I want to mention before I close this post:

One scene that really plays to the ELFs watching is when Heechul and Kangin are at Kangin's Aunt Mae's house. "Rokkugo" is playing in the background and Kangin makes a remark saying "What kind of music is this?". They also comment on Sungmin's popularity after being hit and Heechul read somewhere that he is now dating BoA. BoA is in the same entertainment company as Super Junior and is their Sunbae. 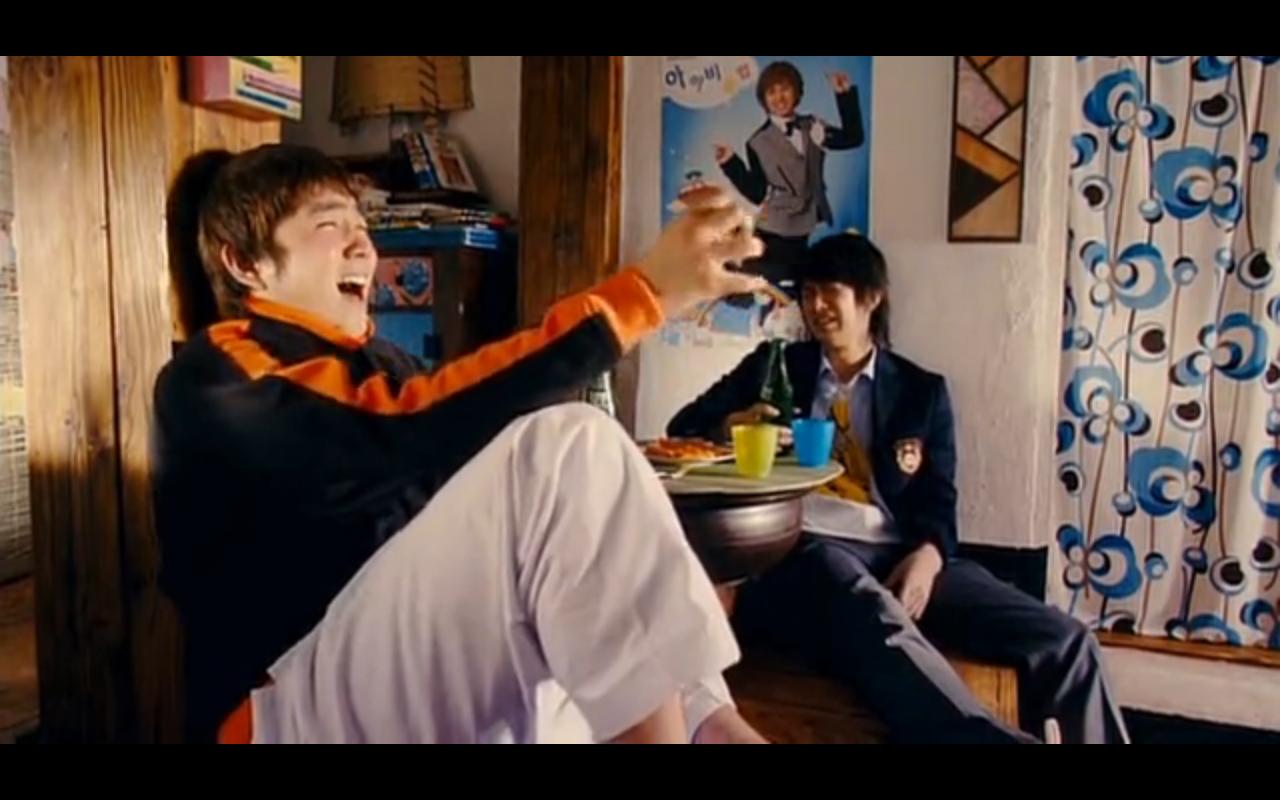 This isn't a scene but a person. How wonderful was Ryeowook in this movie? There are really no words to describe his character, it is something that you just have to see. He was so funny and he actually got to show that side of himself because whenever you see him on variety shows, he kind of quiet, but totally adorable. 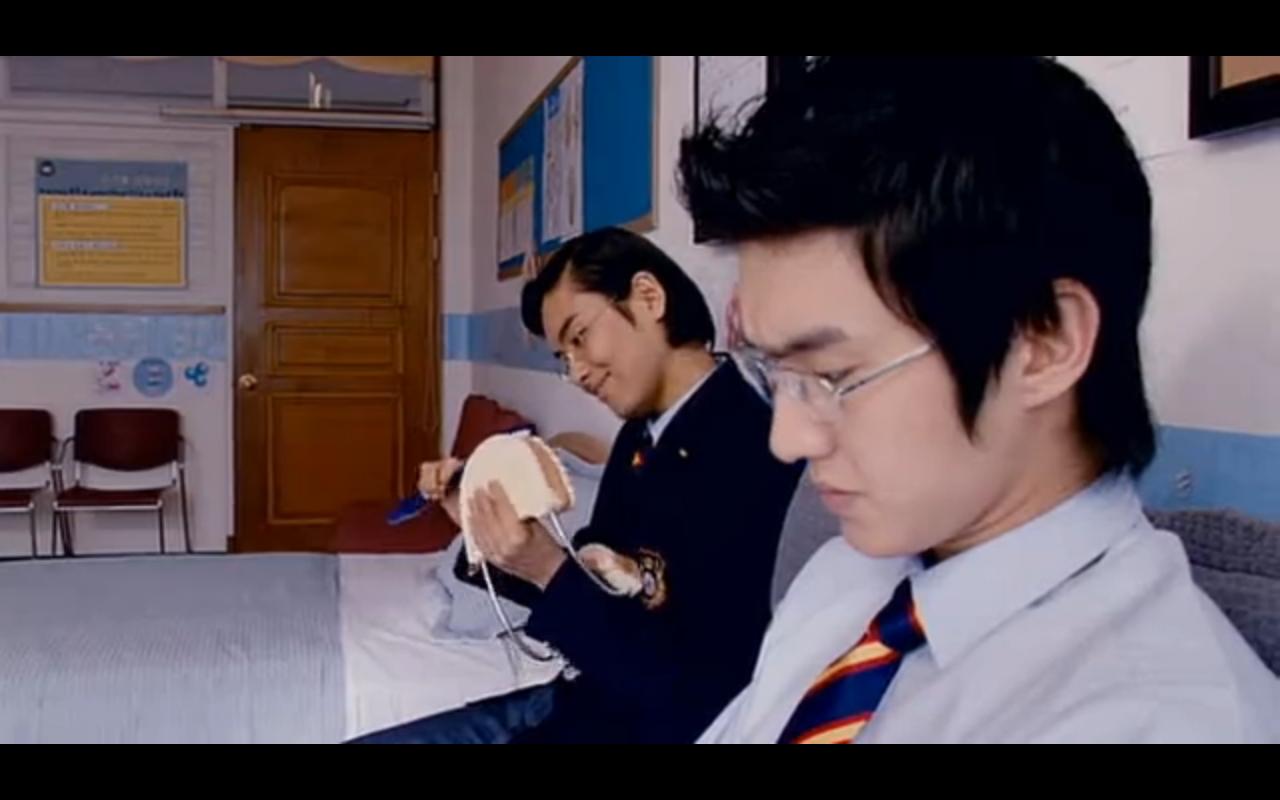 The last part I want to mention is the musical number at the end, because who doesn't love a good musical number? Especially when it showcases a panda. 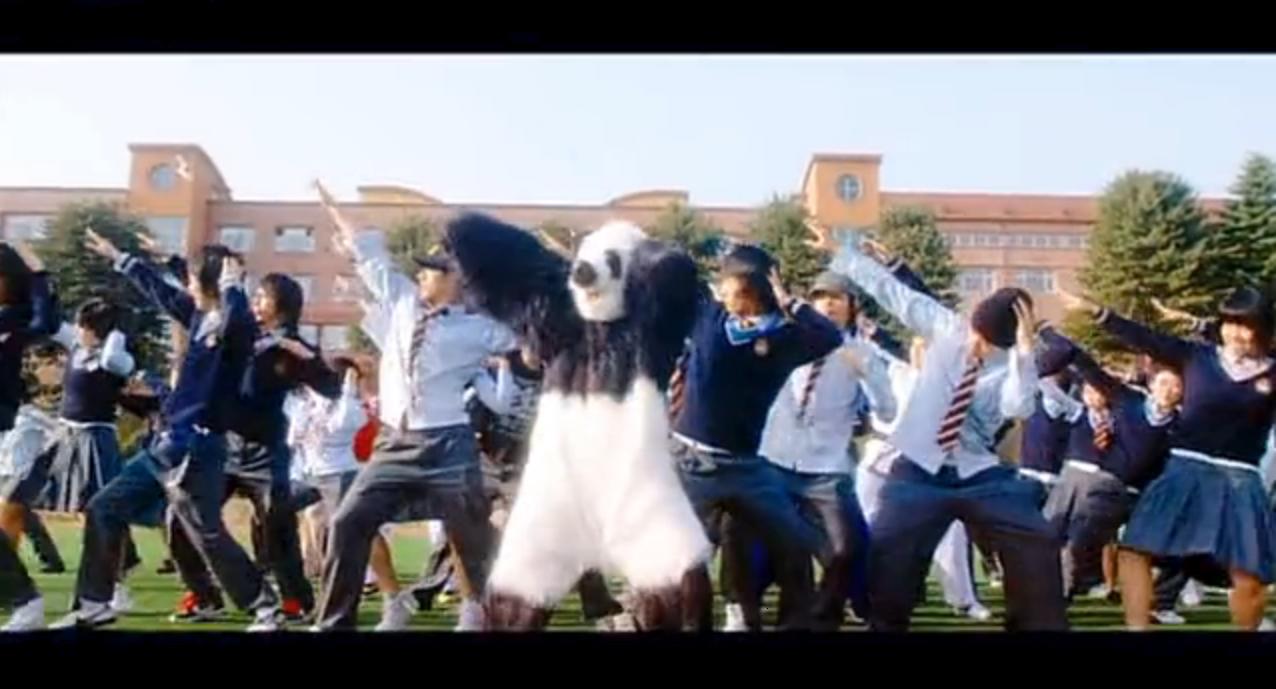 This movie doesn't try to be anything it is not. They are fully aware that they are making something for the fans and that its purpose is to be lighthearted and stupidly funny, and they did their job. It is sad that Kyuhyun isn't in the movie and that Leetuk is only in it for about two seconds, but Super Junior is still Super Junior no matter how many members there are.

What am I watching?

Nail Salon Paris - ASDFGHJKL Yeah, I think that sums up what I feel right now

Dating Agency: Cyrano - This drama continues to impress and Gong Yoo is the next celebrity cameo!

Cruel Palace: War of the Flowers - This can also be described with a ASDFGHJKL, but this is a good computer smash. Things are starting to go down! Not that they haven't been since episode one, but still.....

Full House - Finally finished. I have said a lot of cruel things to my computer while watching this drama. More on that next week.
Posted by F4Plus1 at 11:58 AM