Who Are You vs The Master's Sun 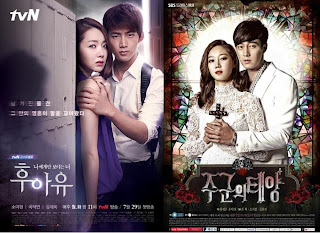 I am watching these two dramas at the moment and while they have have same basic premise - girl sees ghosts and meets a guy who doesn't believe but eventually does - they are very different stories. One is a cop drama (Who Are You) and one is a basic poor girl meets chaebol drama (The Master's Sun). I am going to take today to compare the different aspects of the dramas and see who does better in the different categories, just for fun. I know which one I am liking better at the moment, but what about you?

Reason to get into the shows

The main reason why I began watching these two dramas is because I loved the movie Spellbound. This movie is about a woman who sees ghosts because of a horrible near death experience and is afraid to get near to anyone because she is being haunted by her dead friend. She meets a man who finds her interesting and they eventually fall in love and the man has to be brave enough to stay by her side.

These two dramas are almost the same. The woman was in an accident and almost dies: Who Are You  - female lead is shot and goes into a coma for six years and wakes up seeing ghosts; The Master's Sun - female lead was in a yet unknown accident that granted (or cursed) her with these abilities. After this general plot line though, the males start to deviate because they are nothing alike, but the whole seeing ghosts schtick was enough for me!

Kim Jae Wook plays a detective who was shot and former boyfriend of our female lead. He doesn't talk a lot, but he is good at acting with his eyes and conveying his ghostly emotions in that way instead. I am also very upset that he is a ghost because the two of them have some serious chemistry.

So Ji Sub is your usual corporate jerk who is realizing that he likes the poor female lead before she does which is always fun to watch. He also has a really cute hand motion that he does when he tells her to go away.

The only reason that I pick a rather unflattering picture of So Ee Hyun is because she has had this face for most of the drama. By the time she had seen her third ghost and was still making this face I was so done; she knows they are there and I understand that it is scary, but can you just jump and get over it? It's not a novelty anymore, they are there, get over it.

On the other hand, we have the lovely Gong Hyo Jin who I think is a much better actress and her character has figured out that to live normally you have a split second to be afraid, and then you have to try to move on. Granted, this does not always work when the ghosts are in your face and ugly, but I just like her better.

Seo In Guk is so much better than Taec, I'll just leave it at that so as not to embarrass anyone.

Who Are You doesn't have a second female lead and I don't feel like the drama is lacking for it, but the reason I put this in here is so that I could mention The Master's Sun second female lead, because she is ridiculous, but in a good way. 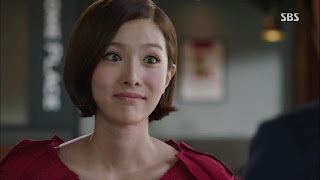 She is so fun to watch because she is trying to be this bad person and interfere with Gong Shil's life because of a high school inferiority complex she has, but normally she just gets majorly dissed by  Kang Woo (Seo In Guk) who she wants to go out with. She did make me mad in episode ten, but I felt bad for her pretty soon afterward. Her character is awesome.

She isn't really the only second female lead though, she might actually be more of a third female lead because Joong Won has the ghost of his first love following him. As of episode ten though, there is a new girl, but she only get half a point right now. So I guess there are two and a half second female leads?

I don't really feel that I can compare these two ghosts because they are so different. Who Are You isn't so much about the creepiness of ghosts as it is about the corrupt justice system where The Master's Sun, yes, it deals with how life is unfair (kids ghosts anyone?), but it is going for a more jump scare approach and a way to bring our main couple together.

As for which ghost I would rather encounter, definitely the Who Are You ghosts because they aren't as scary as The Master's Sun ghosts because I am a big sissy baby.

Winner: Who Are You

Of course I'm not going to say what the twist is, that would be wrong, but both shows threw their twist out this week and with The Master's Sun my head is still reeling a little and Who Are You kind of has me saying, well duh.

Who Are You hit episode twelve this week and while I don't hate it, it has let me down. I was expecting a really cool story with the whole ghost angle with the justice system thrown in, especially after the magic that was I Hear You Voice, but this is a little lack luster. We haven't seen a ghost other than Hyung Joon since the beginning, but the drama does move forward at a nice pace. I also live for the flash backs that we are given of Hyung Joon and Si On because, as I have said, their chemistry is amazing and the fact that he is dead sucks! 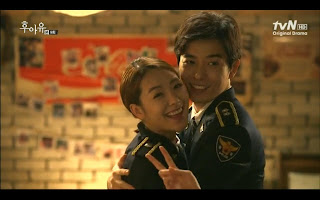 The only Hong Sister's drama that I have ever watched is You're Beautiful so I can see the parallels in the writing style and I am loving it. I am also glad that I never watched Big because I don't have the hesitancy that I see in some other people who are writing about this show. I really am loving everything about this show right now though; the characters are great and the actors are doing a wonderful job at making sure that they stay that way. I also like how the ghosts haven't disappeared, but they are taking a step back or simply becoming more of a plot device as our couple is getting closer together. I love you trash can ghost! 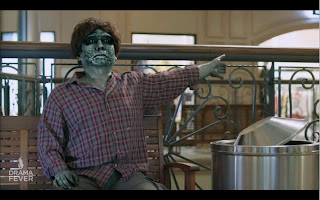 So yeah, Who Are You isn't doing so well and it makes me sad. The acting just isn't that great and the story line isn't as wonderful as I would have hoped for. There is a lot of potential in this drama that is untapped and that is too bad.

Let's just hope that The Master's Sun can keep it together until the end and not decide to give us an ending that wants to make us flip tables.

Email ThisBlogThis!Share to TwitterShare to FacebookShare to Pinterest
Labels: Dramas and Movies, F4Plus1, The Master's Sun, Who Are You