Much to my surprise I am a little obsessed with this song! When it comes to Zico's solo stuff I normally ignore it because I am not a rap person. Rap is stereotypical filled with profanity and vulgar things and I also need a melody in a song. If there is no discernible melody and there is nothing to hum along to it is probably not for me. I am not a gangster, nor do I try to be so I'll just skip away and listen to Super Junior. Thanks, but no thanks.

That is not to say that I write off all rap though. I like rap when it is put to music like Park Kyung's style and now this song that Zico put out. This song also shows how talented Zico is and also why he is a member of Block B. He may put out things like "Tough Cookie" and "Yes or No" and while I can admit those are well created, I can't listen to them because the former makes me uncomfortable and the later just isn't my style. I must admit it's kind of catchy with it's fun beat.

Back to the song at had though, it's so much fun! Every once in a while a Korean song comes out that makes me think "this would be super popular in the States" and this is definitely one of those songs. The chorus has that really catchy "oh oh! oh oh!" that you hear a lot and the bridge builds upon those chorus "ohs" giving the song an aspect that you hear in a lot of popular music. 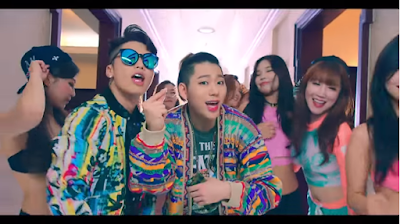 The beat of the song is also really cute for a lack of a better word. It's simple and it works with the innocent sounding chorus of "I'm a boy you are a girl". I am a little torn about the lyrics as whole though which is why I have been holding off on publishing this. The struggle of an international fan is real.

In the chorus it says that "beautiful girls should be well treated" but I am unsure it the man, or Zico I suppose is actually treating this woman right or not. He saying they should be well treated but he seems to be treating himself by acting nice to get himself a hunny for the night. At the same time it sounds like a boy who is right at the edge of manhood and he "fancies himself a black night" when he really is just a boy who is looking for a girl.

The song also talks about going to fancy parties and not fitting in the Western influence that is settled in Korea. After reading these lyrics the video made a lot more sense because Zico and Babylon were doing a lot of stereotypical rich white guys stuff. They were golfing, playing polo, and hanging out by a pool with pretty girls. The last part isn't specifically rich white guy territory, but I feel like playing polo is about as stuffy and white bread as you can get. 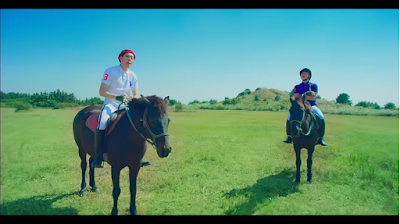 One thing in the video that bothered me more than anything was Babylon's grill. I think grills look so stupid. It makes the wearer look like they don't have lips because they are so determined to show as much of their grill as possible. Say no to grills.

So, overall, I quite like this song. The beat is good, the sound is good, the lyrics leave me questioning a lot of things, but I can deal with that last part. I'm glad that a Zico song came out that I actually like because he is very talented and I love all things Block B. Will I ever like another Zico song? Who knows, but I like this one so that's good enough for me.