Yay! BAP is back, but they are still under the same label which is a little weird to me. It makes me wonder how everything was settled and what it means for their future. I don't think they would still be there if they weren't being treated well. It makes me think of what happened with Block B and how everyone was nervous for them because of all the baggage that they had as a group but BAP didn't (doesn't) have all those scandals so it makes me wonder if they had actually parted ways with their company if someone else would have picked them up. The entertainment industry, especially the Korean one it seems, is really rough.

That brings me to this song and its lyrics. The lyrics of this song are basically saying we are a group and even though the world is cruel, as long as we are together, they can't stop us. We all know who "they" are and where the anger is directed. I'm so confused about BAP's relationship with their company at this point. They're obviously not afraid of their company or else they wouldn't have released this song and it is probably something that we as fans will never understand.

Let's actually talk about the song now though: I liked it. After hearing the song BangX2 on their 1004 album I have decided that BAP needs to go in a rock direction and this song kind of gives that to me. I feel like BAP can do anything they want musically because they are a very musically diverse group which we have seen many times over their relatively short time as a K-pop group. They are a group that has one of the biggest futures ahead of them and that makes me excited. 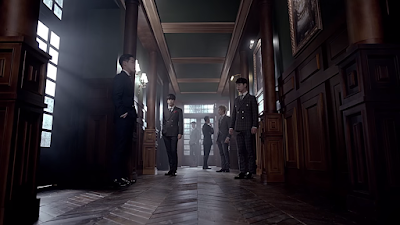 I will say that I'm not totally sold on Zelo's rap part in the bridge. It didn't seem to fit very well in between Yongjae's singing, at least for me. It has grown on me a bit since my first listen, but I think I might have liked it better if his part of the song hadn't been so stripped down. Once he got to the end of his part and all the back tracks joined back in I liked it a lot better. It was such a big song and it seemed a little smaller at that part and it threw me off a little.

I did like Zelo's part that he did with Himchan though. I have always really liked Himchan's voice and I never felt like they really used it well because he is a middle dweller. He sings are raps, but he isn't the best singer and rapper in the group. He's like Sungmin of Super Junior, even though Sungmin doesn't rap; but now that I have said that I want that in my life.

All the members looked really good too. When BAP debuted they had some interesting wardrobe choices (that blonde hair tho) but as they have matured so has their look. They all looked really handsome in this video and were rocking their different styles. The person who I thought was rocking the hardest though was Jongup. Freaking, Jongup. Who gave him that hair color and style? He looks too good. It's not fair. 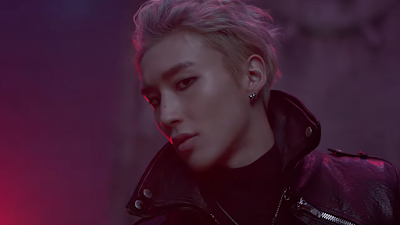 My favorite part of the whole video was probably at the end when they were having that color war with each other. They looked so happy and that is what I want to see from K-pop groups. There is a difference between a false happy that you so often see from celebrities and the real happiness that you saw in their faces in that set. 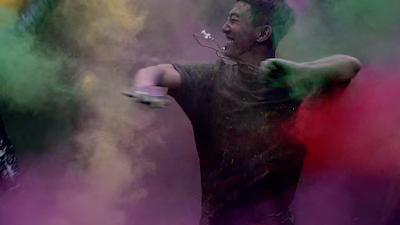 Bang Young Guk has seriously one of the greatest smiles ever and I'm glad that we get to see it again. 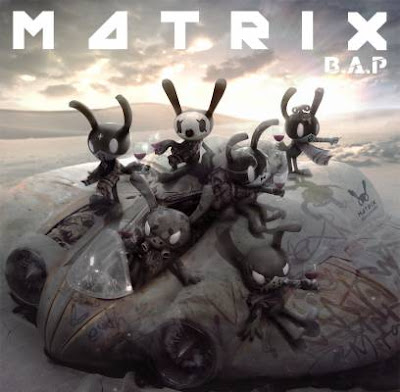 The only BAP album I have listened to is their 1004 album and I was really impressed with that. BAP isn't afraid to play with their sound and you get that in this album as well. The first song on this mini album is Take You There which is a really groovy R&B song. It focuses more on the vocals in the group and allows them to hit those high soaring notes that Baby's have been missing for so long.

Monologue takes itself very literally as Leader Bang begins the song with a actual spoken monologue and he and Zelo make up for lost rap time in Take You There to knock my socks off. My beef with this song is it is only a minute and a half long! It was building and building and then it just left me hanging. I guess it builds up to the title track, but I was waiting for more face melting raps from those two. 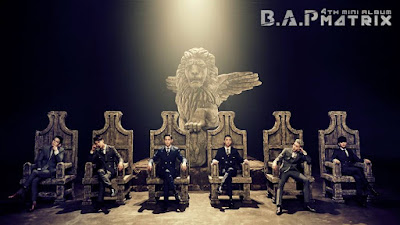 Be Happy is truly that. This has so much funk and it's so weird that it shouldn't work but it does for some reason. It's so different from what has already happened and I'm really confused but this song really does make me happy so I can't hate it. I do it hate when I find something ridiculous at work because I have to maintain my composure and look professional but on the inside I'm laughing madly. Thank you for this bit of weirdness BAP.

Blind brings us back from planet weird to a more expected BAP song. This song is absolutely lovely from the singing to the raps, you can hear all the emotions that everyone is bringing forward. It's songs like this that make me wonder about BAP's relationship with TS. They say they have reconciled and this song is about being blinded and back stabbed by a girl, but are we really talking about a girl?

I'm glad that BAP is back and I hope that whatever needed to be dealt with is over and this boys can continue to do what they want to do. They are all really talented and I hope that we are going to be able to see those talents from now on without any issues from a company that only seems concerned with money and not with the well being of their artists.